BC-Wide Courage To Come Back Nominations 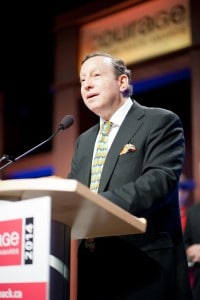 The Power of The Human Spirit

You can hear the passion in Lorne Segal’s voice when he talks about The Courage To Come Back Awards.

Segal, President of Kingswood Properties Ltd., is the Chair of the BC-wide campaign of recognition, and its number-one cheerleader.

“The Courage Awards are such a great initiative, who could remain unmoved?” he says. “Think about it: in this age of bad news and sad stories, we get to learn about and honour heroes.”

“I call nominees the ‘heroes among us’,” Segal smiles. “They don’t realize the impact they have. That’s why we are putting the call out for people to come forward and nominate someone they know. Nominating someone is a way of saying ‘you make a difference’.”

Segal knows about making a difference: he is a recipient of The Order of British Columbia and a Queen Elizabeth II Diamond Jubilee Medal, both recognizing his philanthropic work.

The Courage To Come Back Awards, presented by Coast Mental Health Foundation, recognize citizens in a number of categories: people who have overcome addiction to drugs or alcohol; others who have beat tremendous medical odds or undergone extensive physical rehabilitation; and people who have recovered from mental illness, or from dire social or economic adversity. There is also a special Youth category for people 22 years and under.

The common denominator in all categories is that the person nominated has overcome significant illness or adversity and reaches out to help others. They have “come back to give back.”

“The people who are nominated for these awards are simply amazing,” says Segal. “Every year I am astonished at the power of the human spirit. These are ordinary people but they have done extraordinary things, and because of that they encourage others.”

“Nominees don’t see themselves that way, usually. They are humble. They always say they were just doing what they had to do, but in the process of overcoming their own challenges plus helping others, they inspire their friends, family members and co-workers.”

The award recipients are chosen by a large group of experts and laypeople who volunteer their time to review the stories and select the final six.

Recipients will be honoured at a gala on May 5th at the Vancouver Convention Centre West.