by Gerald Haslam – founding member of Coast Mental Health Foundation, author, past member of The Courage To Come Back Executive Committee 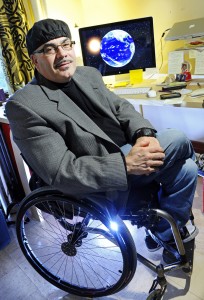 Jerome Bouvier received the 2011 Courage To Come Back award in the Addiction category because his friend Ted Kuntz wrote a letter.

No, that’s not the whole story, not by a long shot, but it’s a crucial part. Nobody achieves a pinnacle like this just because someone else sits down at a computer, but part of it is pretty simple: no nomination, no award.

Kuntz is a Coquitlam psychotherapist in private practice who met Jerome about 15 years ago. The two of them worked together on finding innovative resources for troubled youth. Years later, Ted made the connection between Jerome and the Courage awards. Bouvier is Executive Director of PoCoMo Youth Services Society, which offers street-level services and a mobile drop-in centre to young people in the Tri-Cities of Port Coquitlam, Coquitlam and Port Moody.

Ted Kuntz first learned about the Courage awards through stories in The Province. “I’d been captivated by the stories of recipients over the years,” he says. “I thought about it and wanted to put his name forward. It wasn’t about winning; this was a story that deserved to be told. I figured that a committee of people would read it, and once they knew what he’d accomplished, they’d want to honour him.” Without Ted’s letter, no award.

“There are just so many great stories,” says Patricia Wiggins of Coast Mental Health Foundation, presenter of the Courage awards since their inception in 1999. She reads every single nomination and arranges the six ‘category panels’ of a dozen or so volunteers, including experts in the various fields, to make the short list of two to five nominees in each category. Then a group of 16-20 distinguished citizens, also all volunteers, makes the final selections. “The choices can be incredibly difficult because there are so many deserving people. A number of our recipients have been nominated more than once.”

Ted Kuntz says the nomination process is “exceedingly easy. For me, writing about Jerome felt like a celebration. People like him teach us how to move through adversity.”

Whether or not the nominee ends up receiving the award on stage at the gala dinner, Ted continues, being nominated gives people who have faced severe challenges an important boost. “I think they feel validated,” he says; “it lifts them higher and they want to contribute more.”

“We hear that all the time,” Patricia Wiggins says. “The nominating process brings people together, increasing their understanding of disabilities, and gives respect to those who have endured so much.”

So what makes a perfect nomination? There are tips on the Coast website, where the nomination form can also be downloaded couragetocomeback.ca “In general,” Wiggins says, “ just tell the story: Don’t overload the selection panels with too much information. Letters of support from others who know the nominee are very helpful.” (Ted Kuntz’s 2011 letter was four typewritten pages plus several testimonials from friends and colleagues’ of Jerome). “All the nominees have made a courageous comeback, but remember that giving back to the community—motivating and helping others—is very important. The panels are looking to be moved and inspired.”

Clearly, Jerome Bouvier moved and inspired them; his journey from drug addict to community leader has brought a tear to many eyes. But for Ted Kuntz and that letter, though, you might never have known.